This is Flame, my daily driver from about mid April to late October (my winter car will be the subject of another post). I bought it on November 24, 2010 and have been driving it regularly since. I had spotted it advertised on a local classified ad website for only $600, and I called the seller to arrange a time to come look at it in the morning. Well, that afternoon one of the heaviest snowstorms Utah had seen in years (and the first classified as a blizzard since 2001 or so) rolled in, closing schools and businesses everywhere—something that rarely happens in Utah since having lots of snow is a regular part of life here during the winter months. I really wanted to take a look at this car, so my dad and I trekked out into that year’s version of the snowpocalypse the following morning.

We met the seller, who told us that a few other people had said they were planning to come buy the car that morning, but canceled because of the storm. We took the Celica for a test drive around the block, and decided to offer $500 for it, since that was the amount of cash I had on hand. Probably realizing that the car was worth more than the $600 he was asking, the seller declined my offer. I pulled out my wallet and found another $40 in odd bills, and added that to my offer. He laughed and said something along the lines of “sure, why not” and the Celica was mine for $540.

These are old pictures, and I’ve made some minor changes since they were taken. It now has a set of stock alloy rims (which came from a black Celica that I sadly wrecked) and we’re in the process of returning it to a brighter, closer to original shade of red with 3M vinyl. This dark metallic red is a custom job that wasn’t done particularly well in the first place (there are runs and overspray everywhere) and is generally past its prime. You can’t see it in these pictures, but there are actually some light ghost flames painted on the hood, which is why we call it Flame. 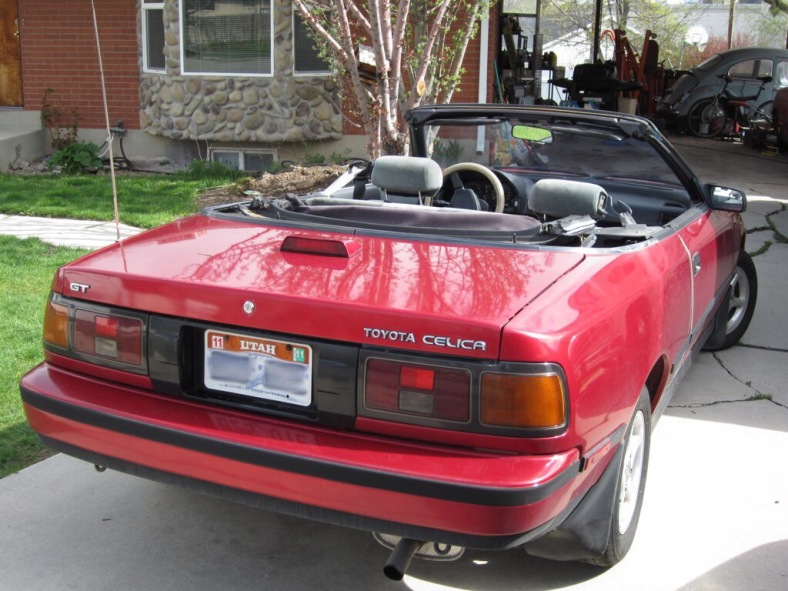