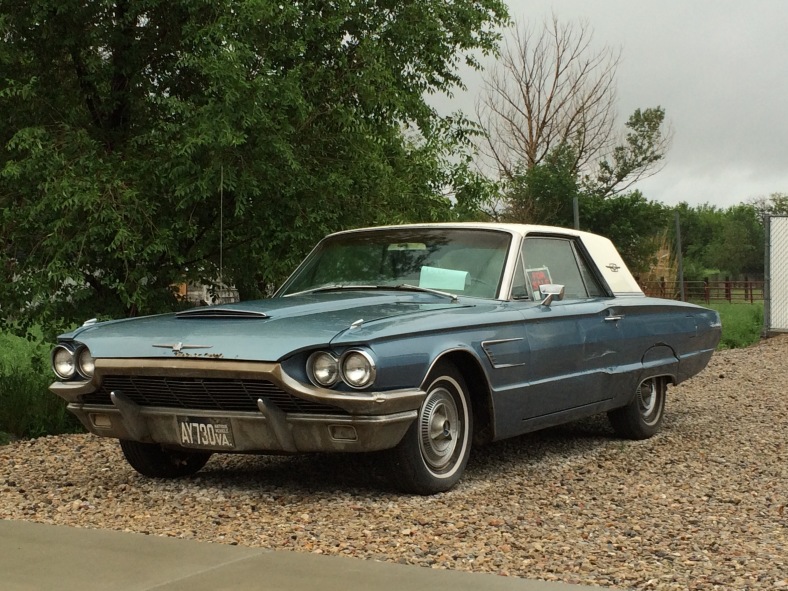 Interestingly, out of the three Thunderbirds we’ve previously featured, two of them have been 1965 models like this one. For some reason they seem to be relatively common around here. 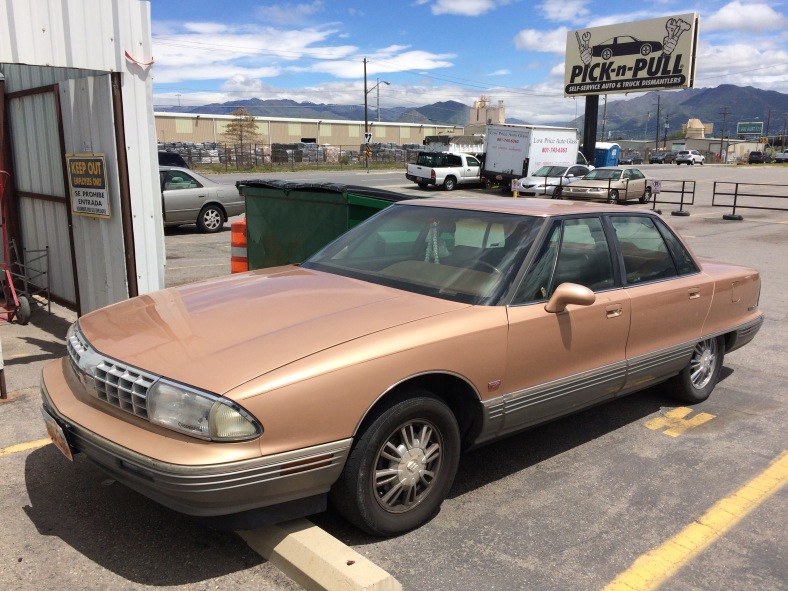 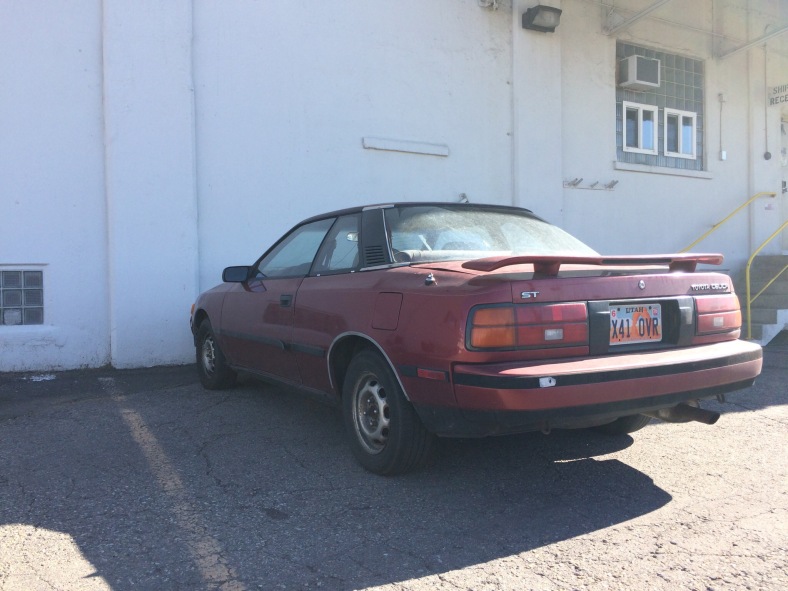 The 4th generation Celica has some really nice design elements, but the ugly roof and pillar treatment is really a horrible distraction. Fortunately, Toyota commissioned ASC to chop the horrible roof off the Celica coupe and gave us the ﻿convertible version. 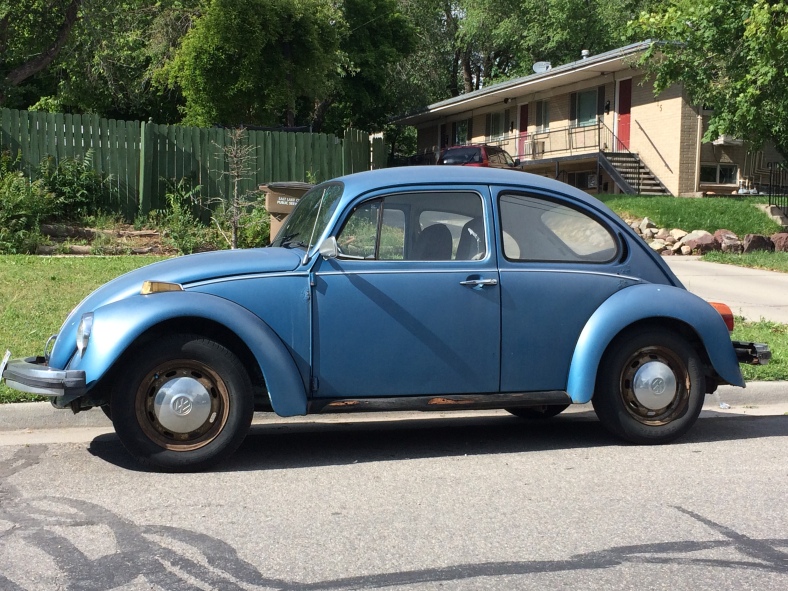 I’ve always preferred Beetles from the mid-1960s and earlier over later models, so it’s always been a bit more difficult for me to identify the specific model year of a Beetle from the 1970s. After researching it I can confidently identify this Beetle, which I found on a residential street in Salt Lake City, as a 1974 model. It came down to three features. First, the large “elephant foot” taillights make it easy to pin this one as a 1973 or later. I learned that the front turn signals were moved from the top of the fenders down into the front bumper for 1975, so that narrowed it down to ’73 or ’74. There at first didn’t appear to be any significant exterior changes between those two years, but I finally discovered that ’73s didn’t have the plastic end caps on the bumpers that this example has, so I was able to settle on 1974 as this Bug’s year. 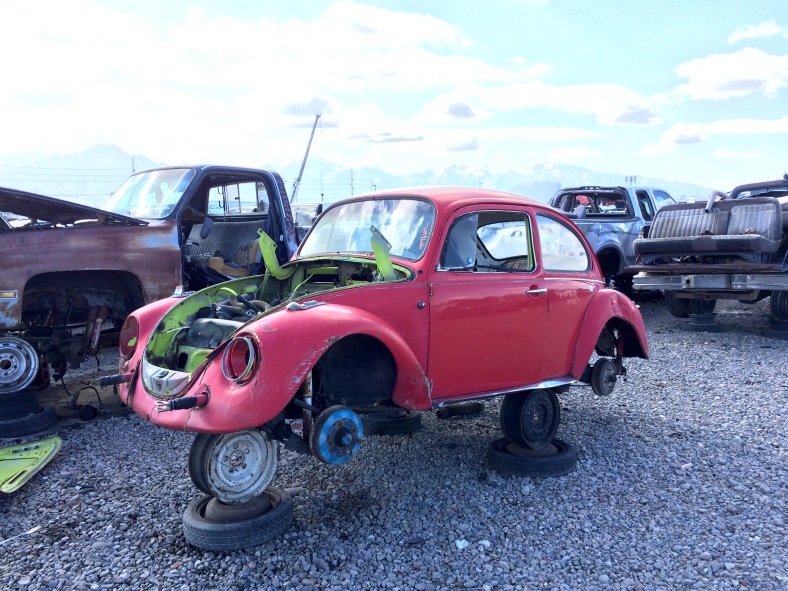 Another junkyard Volkswagen. This one looks like it’s led a bit of a rough life, going through multiple color changes and finally ending up being parted out. Besides the missing parts, which have likely been removed since arriving at the wrecking yard, it looks like it would have been restorable. Even though it’s a bit sad that it’s been permanently taken off the road, Beetles that show up in wrecking yards here usually get picked over pretty well before being sent to the crusher, so at least this Beetle’s parts will go on to keep other Beetles alive.

The car is gone now, but while it was still in the yard I saved the picture Row52 had of it in a slightly more complete state. 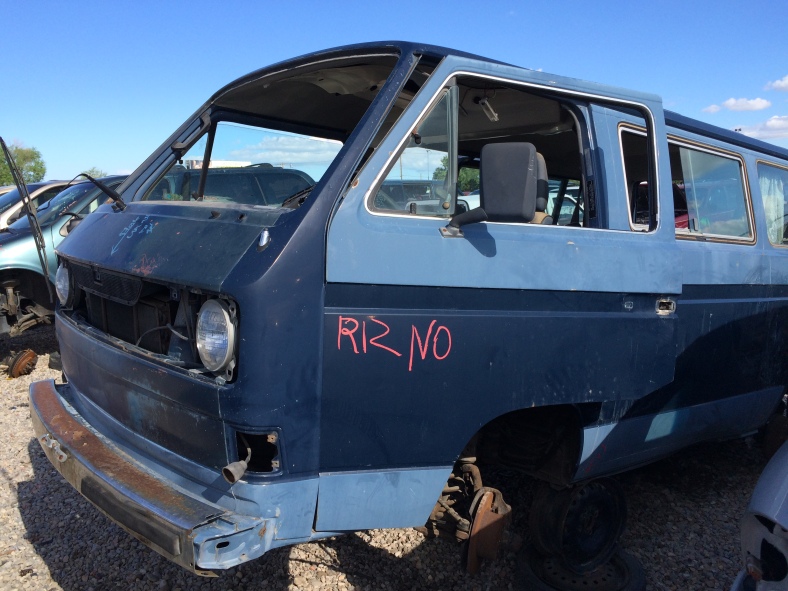 I came across this poor T3 in a self-service wrecking yard in Salt Lake City a few weeks ago. Row52.com, the service the yard uses for its inventory, has it listed as a 1982 model. Even without having the model year confirmed, we can tell from a quick glance that this Vanagon left the factory in Germany with an air-cooled engine—the T3 switched to a water-cooled engine part way through 1983, and those vans had another grille below the headlights for the radiator. Although the Beetle and T2 bus continued to be produced with air-cooled engines in Central and South America into the 2000s, the T3 was the last new Volkswagen design to feature an air-cooled engine, and also the last new rear engined model, making it a significant vehicle in automotive history.

I saw this beautiful Corvette Stingray convertible on my way home from work a few days ago. I love my Celica convertible, but I couldn’t help feeling just a little jealous of this convertible…

The chrome bumpers on both front (you can see a tiny glint of chrome in front of the wheel) and rear indicate that this Corvette is, at the newest, a 1972 model. The chrome on the front was dropped in ’73 and the rear was restyled with an integrated plastic bumper for ’74. The last year for round exhaust cutouts was 1969, so this Corvette was built somewhere between 1970 and 1972.

A very nicely restored 1967 Chevy El Camino. Love the stock look. It must say something about our taste in cars that the most popular American coupe utility is one of the last of the class to appear on this blog…

This is an older picture, date stamped 17 October 2014. I believe my brother Luke shot it for me as we were driving that day.

This Brat was spotted in Park City, Utah a few months ago by a friend of mine. It is either an ’86 or ’87, as indicated by the lack of jumps seats and mounting brackets for head rests in the bed. 1987 was the last year Brats were sold in the United States, but they continued to be produced until 1994 for Europe, Australia, Latin America, and New Zealand. This example is very rusty, like most Brats are at this point. One thing that caught my eye immediately is the wheels. Most Brats still retain their original wheels, because the 4×140 bolt pattern was only used by Subaru and, oddly, French manufacturer Peugeot. Consequently, there are very few aftermarket rims out there, and this is the first (and only) time I’ve ever seen wheels like this on a Brat.